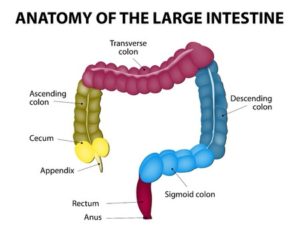 Feeling toxic? … Here we discuss how you can detoxify the bowel and maintain optimal health.

Why Detox the Bowel?

The bowel (colon) is the most direct route of removal of toxins aside from the liver and kidney.  The previous blogs in this detox series look at ways to improve a sluggish liver and how to optimize kidney function.

According to oriental medicine an adult should have 2-3 bowel movements per day and pass 2-3 feet of fecal matter a day.  This occurs in only about 20% of cases that I see so bowel congestion is quite common.

Bowel inefficiency is associated with some of the top nutritional syndromes seen in society today.  Optimal thyroid function for example is extremely important to intestinal health as a sluggish thyroid causes poor stool transit.  Bowel congestion is also problematic if a patient has heavy metal toxicity as the liver and bowel provide the main route of removal of heavy metals (except mercury which is primarily removed via kidney).

Here in this article we will focus on colonics, enemas, herbal support, visceral manipulation, and mineral supplementation.

Basic chemistry dictates that water moves into areas where there are greater numbers of mineral ions (colligative properties).  When the bowel is hydrated waste passes out more easily.

Oral supplementation of magnesium is typically used for this purpose.  Cheaper forms of magnesium can be used if the aim is to get the bowels freed up initially as these forms are poorly absorbed and remain inside the digestive tract unabsorbed.  The more expensive forms of magnesium allow greater systemic absorption of elemental magnesium which promotes natural wave-like movement of our intestines to aid transit of matter down and out.  Magnesium deficiency is common and correcting this deficiency can yield global benefits, for example magnesium can help you to stay asleep and alleviate PMS.

Herbs that promote bowel contraction such as Cascarra sagrada often work really well but can be aggressive and cause discomfort.  They are often used to get things moving in cases with significant congestion.  Slippery elm is one of the best herbs for bowel congestion (and/or diarrhea) and is less aggressive.  Slippery elm is a prebiotic (feeds good bacteria) that is capable of providing a fiber dominant bulk action that aids in the transit of matter down the tract.  You must consume adequate water while doing slippery elm.

An enema uses about 2.25 liters of water to flush out the distal end of the large intestine (sigmoid colon) where waste collects.  Colonics by contrast are more thorough and flush up to 68 liters water through the entire large intestine.  Colonics often soften impacted and dried fecal matter that coats the intestine and have the ability to eliminate undigested food, gas, mucus, and parasites.  To facilitate the wave-like movement of colonics and to enhance lymphatic drainage and vascular circulation, the abdomen is often massaged and the water temperature varied.  Visceral manipulation can also help get your digestive tract moving contents out efficiently.

The BodyMindLink series by Dr Ray Pataracchia ND provides insight on Nutritional and Naturopathic approaches that matter most and have the potential to benefit general and mental health.  Clinical approaches discussed are implemented by the Naturopathic Medical Research Clinic in Toronto, Ontario.