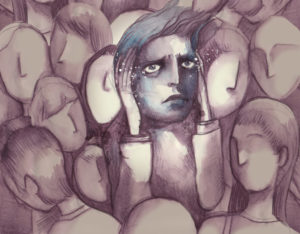 … Do you have PTSD?  Post-Traumatic Stress emerging after a life changing event can cause biochemical changes that Orthomolecular Medicine can aim to correct.

Our body’s stress compensating mechanisms can fail us if we experience sustained levels of acute stress.  In my practice it is not uncommon to see people in current or recent states of acute stress.  War veterans are a classic example of stress exposures that can culminate in post-traumatic stress.  PTSD is a condition where the acute stress of a life situation has profound ramifications.  Acute stress hits all facets of our population, adults and kids. At the time of experiencing a life changing event your body can be forced to sustain an abundant release of adrenaline that causes secondary biochemical/physiological imbalances. Mineral deficient stress is one cause of stress intolerance.  Adrenal anxiety is also a huge component of stress.  Herein we take a look at the body’s adrenal stress response for answers as to why some of us may find it extremely difficult to maintain stress tolerance after profound stress exposures.

War Veterans or Prisoners of War

In today’s world there are several stress exposures, but putting your life in harm’s way as soldiers often have to, puts them at high risk for PTSD.  No matter how much training soldiers have they can never be totally prepared for the trauma of war.  Shell Shock after surviving a bomb blast is a good example of a life changing stress situation.  In the classic PTSD case, war veterans are the central focus; they have an obvious need for adrenaline, to stay alive.

Out of Africa: Malnutrition, Starvation, & Brutality

Large numbers of Africans are exposed daily to malnutrition, starvation, and brutality.  This scenario is similar to conditions experienced by war veterans.  Survivors of these stressful life situations often end up with residual and severe biochemical imbalances that profoundly reduce their quality of life and render them dysfunctional in the family unit and community.  If their biochemistry is not optimally supported they may experience a degree of permanent biochemical damage.  Niacin depletion (described below) in such cases is considered a nutrient of choice.

Targeted Nutritional Therapy is paramount here as the diversity of stress related mechanisms in the body can imbalance several pathways that include nutrient deficiency, and compromised thyroid and adrenal metabolism.   Heavy metals also add oxidative stress and compromise body systems; for example, mercury toxicity inhibits the conversion of inactive to active thyroid hormone.  Cortisol excess may also be a major culprit in PTSD; cortisol is the bodies main stress hormone and it is produced by the adrenal gland.  By optimally addressing core nutrient/physiological imbalances, PTSD sufferers can take a proactive road to their health care.

Why Adrenaline? How does Adrenaline play a Role in PTSD?

In PTSD, underlying theories suggest that a dysfunctional adrenaline system is rendered imbalanced in terms of its regulation, production, and elimination mechanisms.  After a traumatic episode, the body needs to quiet down the whole adrenal stress response system; here the body says ‘if you can’t reduce your stress level, I’m going to do it for you’. Adrenaline helps us in times of need.  It helps us to ‘run away from a tiger so as not to be eaten’, to ‘fight to stay alive when threatened’. Adrenaline is a hormone produced by the adrenal glands.  The adrenals sit on top of your kidneys.  The middle layer of the adrenal, the medulla, produces adrenaline.  Adrenaline allows the heart to contract and push blood flow peripherally to saturate muscle cells with nutrients and oxygen so they can react on demand. Many do not realize that adrenaline is also produced in the brain by brain neurons.  Adrenaline is a major catecholamine brain neurotransmitter involved in, among other processes, the executive functions of the frontal cortex of the brain.  If the catecholamine system is dominant then the opposing feel good neurotransmitter system, the serotonin system, me be depleted. This may play a role in the depression associated with PTSD.

The following nutrient/physiological considerations are an example of how Targeted Orthomolecular Therapy might play a role in alleviating post-traumatic stress. B3 (Niacin) Therapy

Untamed overproduction of brain adrenaline in times of stress is implicated as a causative factor in psychosis/schizophrenia;  the treatment for this is niacin, a water soluble B vitamin (B3) with a known role in curbing the overproduction of adrenaline.

The first biochemical theory of schizophrenia proposed that too much brain adrenaline released with stress may result in the brain not keeping up with its elimination, and if it sits around too long it can oxidize (a passive breakdown scenario) into a transient hallucinogenic molecule with a structure similar to LSD-25 and mescaline.  Here the orthomolecular treatment for schizophrenia is niacin therapy. Niacin is a nutrient of choice in schizophrenia, and ADD as well.  In ADD niacin can help curb the symptom of ‘mind running’ which may cause inattention.

Abram Hoffer, a key Orthomolecular Pioneer, mentioned that severe stress mechanisms in PTSD may be addressed with niacin therapy. He mentioned that “There is an important lesson from the experiences of these veterans and their response to megadoses of nicotinic acid. This is that every human exposed to severe stress and malnutrition for a long enough period of time will develop a permanent need for large amounts of this vitamin [B3] and perhaps for several others.”

The taming of adrenaline oxidation is aided by implementing vitamin C, a well-known potent anti-stress anti-oxidant vitamin.  Vitamin C concentrates in the adrenal gland.  If you cut an adrenal gland in half it turns orange which is the colour of oxidized adrenaline; this demonstrates the need for a ready supply of this vitamin in the body. Zinc/B6/B5/Adaptogens Zinc, B6, and B5 are other important anti-stress nutrients.  Botanical adaptogens can also help to regulate the stress response by releasing cortisol and adrenaline when needed in appropriate amounts.  These approaches are useful as stress exposures often exhaust the adrenal gland and can dampen the production and regulation of cortisol and adrenaline.

Helping people with stress intolerance is possible by implementing the DUSSP technique of Decency, Understanding, Support, Safety, and Privacy.  For more details on every day tools I encourage everyone to read the Canadian Mental Health Association brochure on Coping with Stress.