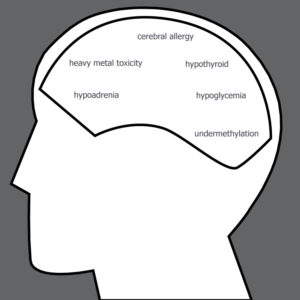 Here we are discussing the primary syndrome aspect of low thyroid metabolism.

A 2003 thyroid article by Heinrich (abstract below) shows a conventional medical perspective that identifys commonly seen low thyroid symptoms that present in mood disorders and psychosis.

Abstract: Hypothyroidism is a medical condition commonly encountered in a variety of clinical settings. The clinical presentations of thyroid hormone deficiency are diverse, complicated, and often overlooked. Hypothyroidism is a potential etiology for multiple somatic complaints and a variety of psychological disturbances. The physical complaints are primarily related to metabolic slowing secondary to lack of thyroid hormone. Psychiatric presentations include cognitive dysfunction, affective disorders, and psychosis. The realization that hypothyroidism might be the potential etiology of an assortment of symptoms is critical in the identification and treatment of the hypothyroid patient. Once hypothyroidism is identified, symptoms usually respond to appropriate thyroid hormone supplementation. This article presents a case of clinical hypothyroidism that came to clinical attention due to psychotic symptoms consisting of auditory and visual hallucinations. The case is followed by a brief discussion of the literature describing the relationship of hypothyroidism and psychiatric symptomatology. References were identified with an English language-based MEDLINE search (1966-2003) using the terms thyroid, hypothyroid, depression, dementia, delirium, mania, bipolar disorder, psychosis, and myxedema and utilization of referenced articles.